Remember to Remember and more…

On 4 April in the morning we went to “our” Temple of Ban Pho Chai (Wat Si Phon Sung) and there the name of “Henk Kerssens” was mentioned in “the list of remember”. The breakfast was first offered to the deceased and after that the Monks and visitors could eat. Siripron and I took care of some of the dishes and gifts to the Monks.
Tree weeks later, the daughter of our neighbor across the street died. She had had a “cerebral infarction”, was a few weeks in hospital and then came home, but she did not recovered. On Monday was the cremation, on Wednesday the neighbors got her remains and then she was remembered. 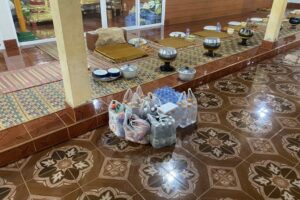 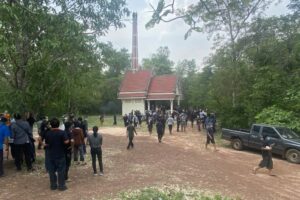 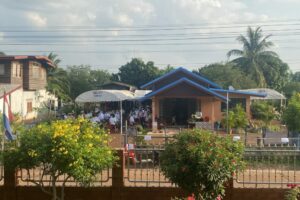 Preauw & Both came from Bangkok because Both had to do the Army lottery on 5 April. To his regret he draw “red” and that means he has to serve in the Thai Army. Both will have to go somewhere in the second half of this year. On 16 April was the Birthday of Mudmie & Mudmai, the twin of Warunee, we celebrated it with a dinner and cake. Aon, the girlfriend of Benz, became 23 on 25 April and 5 days before that (20 April) her daughter had her Birthday. Other small fact was my 6 years in Thailand, we celebrated it with a pizza and chicken dinner of the Pizza Company. 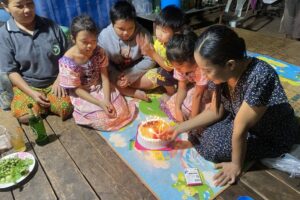 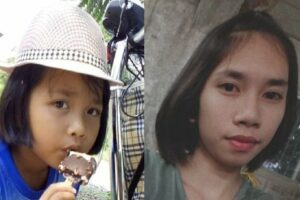 Songkran & Covid-19… I name these 2 together because the home journey of many Thai people to celebrate Songkran was the trigger of the so far biggest outbreak in Thailand. There were limited restrictions but not the same restrictions as 1 year before.
For Siripron Songkran started with a restricted party of the Anamai’s of Sawang Daen Din. Together we went to a limited celebration of our village, did a water blessing in our Temple and to the grave of the Mamma of Siripron. The water blessing to and from her Papa was 2 days after Songkran with Warunee and Mudmie & Mudmai. 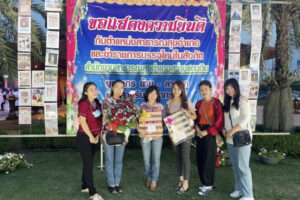 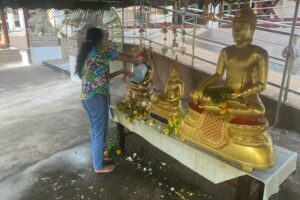 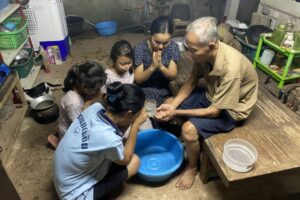 In the beginning of April the gutter around the house and the 2 extra drain pipes were finished. We bought a battery operated hedge trimmer of the same brand (Swift Garden) as our lawn mower, we have now 2 same batteries and chargers. We the Kärcher high pressure sprayer I cleaned the main parts of our concrete around the house. In the garden the mangos & jackfruit are not ready to eat, but next month they will be. 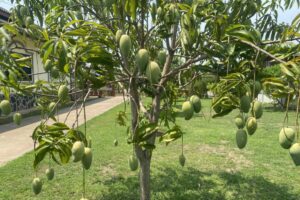 On 2 April the gear connection to my rear wheel of my mountain bike was broken. Apparently this part is difficult to get and it will take more than 1 month. As an alternative activity I walked a few time 5 km around our village. For the virtual challenges I finished the marathon in Greece, I started & finished a half marathon in London and I am busy in South Africa (Kruger Park), Italy (St. Frances Way). As new ones I started in Spain (the north route of the Camino de Santiago) and I am “climbing” Mount Everest as part of a 3 mountain pack I bought.

Other things that happened:
– I am now more than 6 years in Thailand, we had a pizza++ dinner.
– Thursday 8 April I went to Immigration for my 90-days report.
– I tried-out a simple kick scooter but the solid wheels are too strong for the roads.
– I ordered a Swifty kick scooter, with real tires, it will come in June or July.
– Siripron got her first Sinovac Covid-19 injection.
– Lunch at Kham Ta Kla and also pick-up my order of bread and sausages.
– Car battery problem and a new battery at the Honda garage.